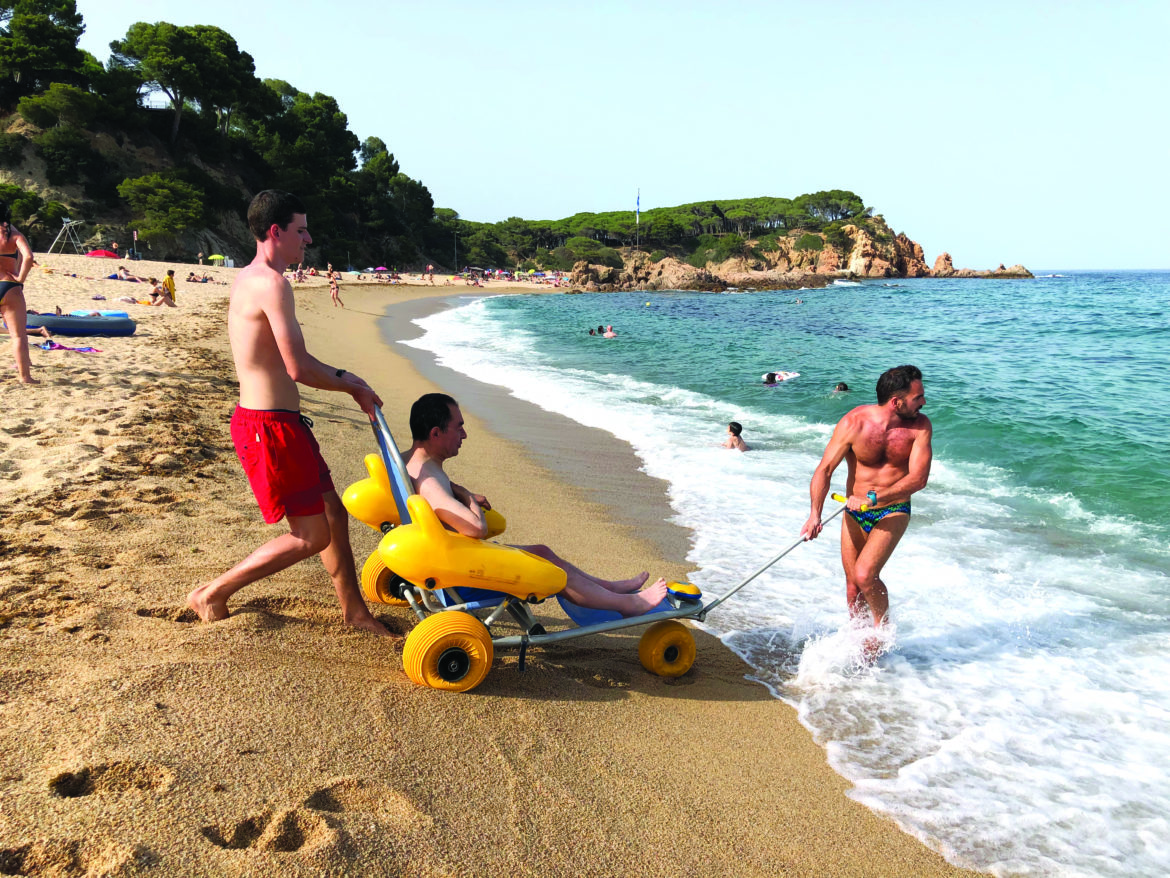 When Isabel Godoy from the Costa Brava Girona Tourism Board invited me to visit, I jumped at the chance. But it was with some trepidation that I broached the subject of bringing my family along.

I needn’t have worried. Isabel was very keen to show me – and the world – that Costa Brava Tourism’s focus was not just on access, but also inclusion. After all, who goes on holiday alone?

I asked her to put together an activity-based program with a bit of beach time for my daughters. That’s not to say we weren’t interested in the region’s architecture, culture, history and gastronomy – our previous visits have made us big fans of everything Spain has to offer. But I hoped to take on activities that most people wouldn’t associate with travelling with a disability. I was not disappointed. The program was adventurous by anybody’s standards, and our thrills took place on land, sea and in the air!

First up was sailing, organised with Club Nàutic L’Escala, which runs a program to teach people with access needs to sail. The Club has Hansa boats that are easy to manage and impossible to capsize, and a hoist for people with reduced mobility. There’s a deep serenity in being propelled by the wind with waves lapping at the bow of a boat.

The same can’t be said of our next activity. Powered paragliding is an experience that can only be described as a buzz! We met the friendly Vol Factory team at an isolated airfield a few kilometers outside Estartit. They made no fuss about getting me safely strapped into a powered tricycle, with the driver directly behind me, a massive fan behind him, and a parachute trailing behind the whole contraption. It was truly exhilarating to soar over mountains, fields and the coastline.

As is so often the case, it was a family connection with disability that led Vol de Coloms to adapt one of their hot-air balloon baskets to make it accessible to people with reduced mobility. It was an early start for the three-hour flight over La Garrotxa Volcanic Zone Natural Park, an incredibly picturesque region of volcanic craters and mediaeval villages. Up to three comfy hydraulic seats with optional harnesses can be fitted inside the basket and raised for a perfect view.

As if this wasn’t enough excitement for one day, Isabel had organised a hike around El Croscat Volcano for the afternoon. I rode in a one-wheeled all-terrain sedan wheelchair, the Joëlette, with a sherpa in front and behind. This simple piece of adaptive equipment – similar to the TrailRider used in Canada and Australia – can go on almost any hiking trail, even over fallen trees. It’s liberating to be able to access remote areas where no wheelchair will take you, especially with family and friends.

Perhaps Isabel thought it was time we came back to earth, because the following day she organised a visit to award-winning winery, La Vinyeta. It was no ordinary winery. We sat enthralled as Josep recounted how he and his wife Marta had rehabilitated the vineyard and centuries-old olive grove through sustainable and chemical-free farming. Having noticed that chickens like eating the grape waste, he now keeps free-range hens for eggs. Instead of using a diesel tractor to cut the grass, he keeps sheep, and uses their milk to make cheese. Understanding the dire state of European bees, he also began bee-keeping and now also sells his own honey. After a wine-tasting and picnic that featured La Vinyeta produce and sausages made by Josep’s butcher father, we left in awe of this passionate but modest young man.

Let’s not forget that my daughters were keen to swim in the Mediterranean! We visited several beaches in the region and I was considerably impressed with their accessibility. Australia is known for its beach culture, but we are only just beginning to roll out the beach matting, and beach wheelchairs are few and far between. In Costa Brava, most beaches have some accessibility features and several have a beach matting, accessible change rooms and amphibious wheelchairs. San Felíu de Guixols even has a portable hoist and permanent handrail into the sea itself! Lifeguards at some beaches, including Sa Conca, are available to accompany disabled visitors into the sea.

Interspersed with these adventures were more conventional tourist activities. We visited the Greek/Roman Empúries archaeological site, a bird-watching lake (Parc dels Estanys) with a wheelchair-accessible hide, did a walking tour of the beautiful, compact and remarkably accessible mediaeval city of Girona (used as a set for the Game of Thrones) and went shopping in Platja d’Aro! We also enjoyed a relaxing mindfulness session led by Edgar Tarrés as night fell behind the closed gates of the Ciutadella in Roses. The history of this atmospheric location stretches back to Greek settlement in the 4th century BC.

The important thing was that everything we did, we did as a family. Facilities and activities were largely accessible. Staff everywhere we went were able to see me as just another client, albeit one who might need additional help. And this is where the difference between accessibility and inclusion lies: it’s about attitude and empathy, not just infrastructure and compliance.

This is an important distinction: the late Scott Rains – the godfather of inclusive tourism was fond of saying, ‘The question should not be “How much will it cost to make this accessible?” but rather, “Is there any reasonable justification for not making this fully inclusive?”’ If tourism operators around the world were to take this on board, so many more people with access needs would be able to use their services.

Isabel certainly proved to us that the Costa Brava has embraced not only accessibility, but also inclusion.

Martin’s trip to Costa Brava and Barcelona was funded jointly by the Costa Brava Girona Tourism Board, Barcelona Turisme and the Catalan Tourist Board.

Lucy And Sammy Aren’t Just Doing It For...