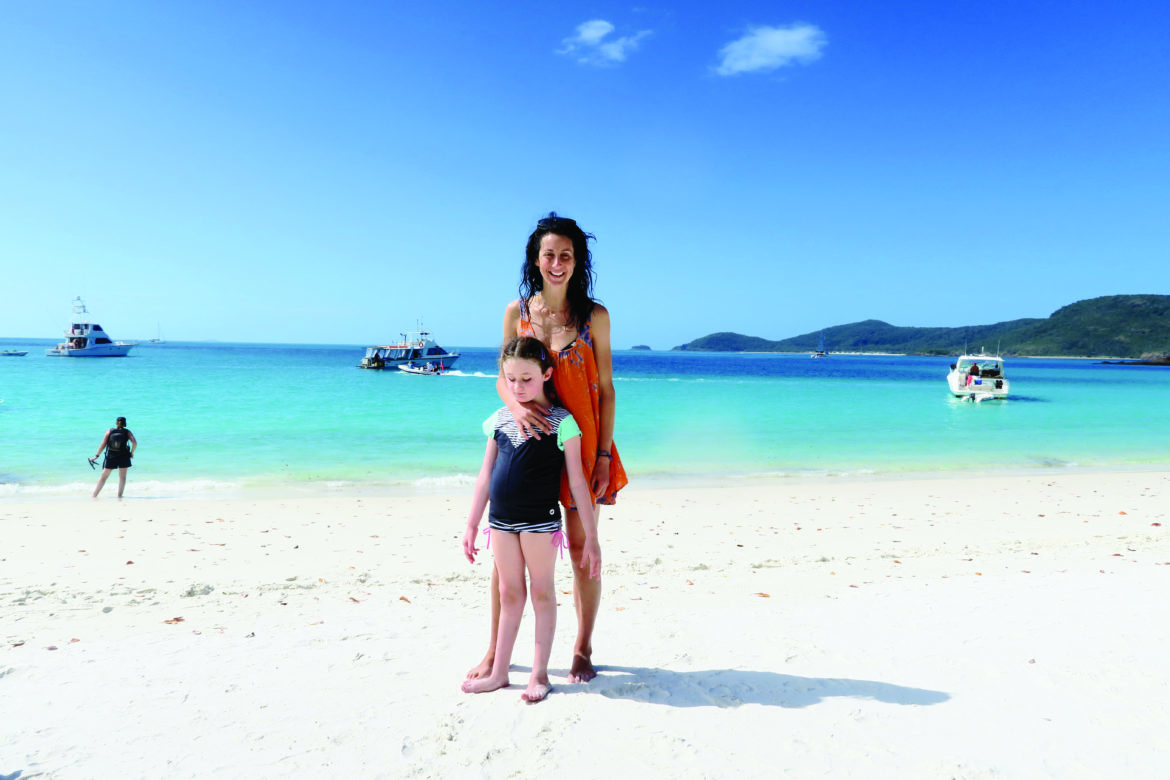 Adventure along the East coast of Australia

Burnt-out, disconnected and exhausted as a solo mum to my 7-year-old daughter with special needs, I was desperate to escape the 9-5 grind. I wanted to bathe in the magic of wide open spaces, starlit nights, sunrises over a salty horizon and long roads.

After 12 months of planning, we waved goodbye to a life we’d known. With a caravan and bike in tow, we needed nothing more than a sign directing us to the Pacific Highway. The plan? Travel up the east coast of Australia from Sydney as far as we could without a 4WD.

Some thought it was a little reckless for a single woman and her blind daughter to navigate this great expanse on the East coast of Australia. But I trusted that this experience would offer the space, connections, solitude, spontaneity, freedom and beauty that we sought.

Our senses were delighted in the first few weeks of our journey. On the first day we found ourselves on a ‘stinky and bumpy’ camel ride over the sand dunes of Birubi Beach, near Port Stephens. At a fundraising event in Maitland, we met a helicopter pilot who gifted us with a joy ride in his helicopter. We flew over the magnificent Newcastle coastline, experiencing the wild sensation of a powerful machine as it vibrated, whirled and whizzed. Mackenzie’s tactile and auditory needs were satisfied, while my eyes feasted on the view.

We headed north to Coffs Harbour and learned about the conservation efforts at the Dolphin Marine Conservation Park. We fed and were kissed by a seal and had the privilege of swimming with a rescued dolphin. Getting so close to these majestic creatures, which would have died abandoned in the wild, left us awestruck. We were also amazed by the love of the caretakers.

Our country is rich in history, diverse landscapes and experiences that offer interactive and unique learning opportunities. The Gold Coast Hinterland, for example, offered an array of activities in the lush Mount Tamborine precinct. We revisited this dense rainforest region three times to explore it all. The Skywalk is an accessible and informative walk along the treetops. The Mount Tamborine Glow Worm Cave presented a short but fascinating tour in support of their conservation efforts.

Safe, well-lit, lengthy bike tracks are plentiful along the East coast of Australia. We frequented these for sightseeing, exercise and a dose of fresh air after long drives. I relayed information I read about the towns as we roamed on our bike along the Sunshine Coast, Tin Can Bay, Hervey Bay, Elliot Heads, Tannum Sands, Yeppoon and all the way up at the Whitsundays and Cairns.

We stayed in caravan parks and received warm reception and kind offerings from park managers who provided helpful tourist information and invited us to barbecues on the beach. Mackenzie’s social disposition made it easy to connect and seek guidance and support when needed. We met so many incredible travellers, many of whom frequented the east coast to escape the Victorian winter and were willing to share meals, stories, and assist with broken caravan parts.

We chose destinations based on recommendations of the strangers who became friends over sunset drinks. We loved the interactive Mary Poppins Story Bank Museum in Maryborough. We got up close and personal with an array of animals at the Australia Zoo, and relished the educational bird show and turtle feeding at Billabong Sanctuary in Townsville. Park managers were incredibly considerate of our needs and helpful in suggesting places to visit that would be interactive and enjoyable.

We found ourselves lazing on a catamaran sailing the Fraser Island coast with a skipper named Brian. He was the salt of the earth, weathered and friendly, jovial and full of stories. Seventeen Seventy captured our hearts with its picture-perfect sunsets, rich modern Australian and Indigenous history. We braved a 1770 LARC tour on an amphibious craft that took us along the Bustard Bay coastline, flew down sand dunes on boogie boards, and visited Queensland’s only operating lighthouse.

The Whitehaven Express took us to the oasis of Whitehaven Beach in the Whitsundays where we snorkelled with groper fish. We braved the freezing rainforest waters of the Mosman Gorge in Port Douglas, meandered accessible paths in the ancient landscape and ate an abundance of home-made ice cream from fruit orchards in the Daintree Rainforest. Flying over the rainforest canopy on the Skyrail and the Gold Class upgrade on the Kuranda Scenic Railway was a luxurious and exciting end to our adventure road tripping the East coast of Australia.

Australia has an array of activities that will fulfil the most adventurous, gentle or inquisitive spirit. We had the adventure of a lifetime. It has filled us with wonder, as the memories of that 6-month journey live on.

Tanya Savva is a blogger, author, wellness & life coach and yoga & meditation teacher. Tanya is also mother to Kenzie who is blind, developmentally delayed and autistic. When Tanya’s daughter was 6 weeks old she was told she might never see, walk, talk or survive without medications. Tanya was determined to prove the doctors wrong and give her every opportunity to live a full and joyous life, despite their prognosis.