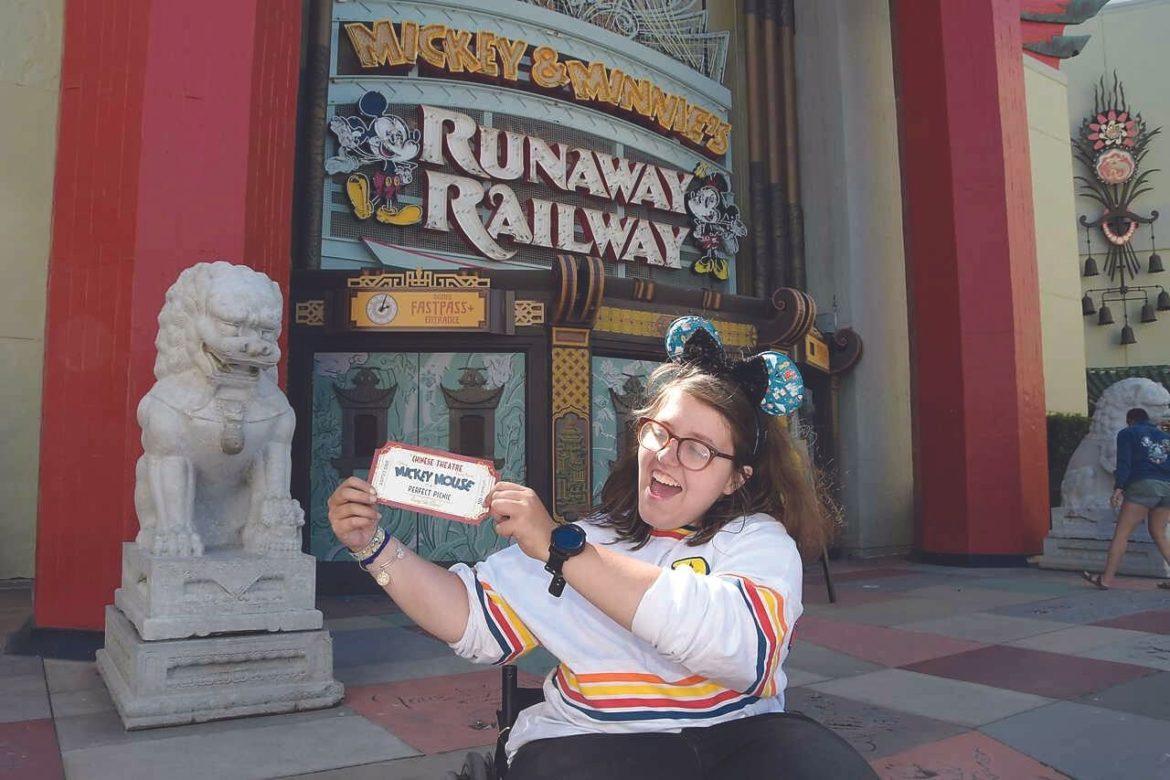 I still remember wearing my cast member name tag for the first time. I couldn’t believe that I was living and working in the most magical place on earth, Walt Disney World.

I was not meant to be a Walt Disney World Cast Member. I was diagnosed with Cerebral Palsy Spastic Diplegia at 18 months old and use forearm crutches and a wheelchair for mobility. But somehow, against these odds, I was living my dream!

I have always loved Disney. Growing up, we had VHS tapes of old Mickey Mouse cartoons. I would watch every new Disney movie immediately it was released. I also visited Disneyland a few times. It was one of the first places where I felt independent as a kid, as I was able to ride almost everything.

Once, I met a cast member (employee) wearing some Disney pins. Pins at the Disney Parks are a massive deal. People trade and collect them with cast members feverishly.

“I don’t know how to get pins, but they’re so cool!” I said to the cast member. The next day, the cast member approached me at our hotel holding a bunch of balloons. Attached at the bottom was a pack of pins. I couldn’t believe it! I was hooked.

Years later, while at uni, I noticed a poster on the wall that read: ‘Spend a year Earning, Working and Learning at Walt Disney World Resort’ on a cultural exchange program.

After researching the program and putting my application in, I began to feel that there was absolutely no way I could go to Walt Disney World. I was still learning how to live out of home, and had never travelled by myself. A few weeks later, when I got an email requesting an interview, I went into a cloud of self-doubt and convinced myself working at Walt Disney World was not possible for me.

I decided to study abroad to trial living overseas and spent six weeks at the University of California, Los Angeles (UCLA). The experience was extremely difficult but I learned the importance of good friends who helped me turn a rough time into a great one. One day, we skipped class together to go to Disneyland.

When I arrived back home, I realised that I had not only survived the six weeks visit but thrived. I immediately re-applied to the program.

At the interview, everyone was dressed in the ‘Disney Look’. The Disney Look is a dress code for cast members, meaning no funky hair colours, visible tattoos or piercings. I was convinced they’d find a way to not hire me due to my disability, so I didn’t bother removing my nose piercing. The first words the recruiter said when I entered the interview were, “Amy, all cast members are expected to abide by the Disney Look”.

I quickly realised that the recruiter was not worried about my disability! Two weeks later, an email arrived in my inbox saying I had been accepted.

I had less than six weeks to prepare. I started doing intense occupational therapy and sorting out work accommodations with Disney. It was a whirlwind of appointments and forms. I even agreed to use a manual wheelchair to increase my independence while in Florida.

The first week on the job was intense, with training shifts often lasting over ten hours.

I had two jobs. The first one was scanning tickets as guests entered EPCOT. The other was as a bus greeter, managing the bus stop at the resorts. Every day, I got to create magic for guests at Walt Disney World and share my love of Disney.

There were many challenges, both disability-related and in general. There were also many ‘ups,’ from hanging out at a park with my friends to throwing an impromptu Bus Stop party for a six-year-old during my shift.  It was challenging, but I had too much fun to worry. Nothing beats getting to ride a rollercoaster right after work!

In the US Disney parks, mobile order is one of the best ways to save time. Once my friends and I were trying to get hot dogs at Casey’s Corner before the fireworks. Casey’s was the closest place for takeaway food to the castle, so the line was incredibly long. My visiting friends panicked about the wait, so we decided to grab a table and order through the ‘my Disney experience’ app. We were eating within 15 minutes. If you have allergies, the restaurants on the system will display their standard allergy-friendly options on the app. Unfortunately, if you have multiple allergies, you may have to wait in line as the app doesn’t allow much customisation.

2. Play Sorcerers of the Magic Kingdom

If you’re visiting the Magic Kingdom, be sure to play the free ‘Sorcerers of the Magic Kingdom’ game. You walk around the park battling villains, using magic cards given to you at the firehouse next to Guest Relations. You can collect one pack and map per day.

Pin trading is still one of my favourite things to do at Walt Disney World and it’s a great way to interact with cast members. If a cast member is wearing pins or next to a pinboard, you can trade up to two pins of your choice. Cast members will always trade with you!

Consider an after-hours event such as Mickey’s Very Merry Christmas Party at the Magic Kingdom or After Hours at Disney’s Animal Kingdom. Most park-goers consider these ticketed events ‘extras’ on top of their daily park passes. For travellers with a disability, I think they are sometimes a better option than a regular park day ticket. You won’t be able to enter until early evening, but the park is often open until midnight for these events. You also get access to exclusive entertainment and some free snacks. This is a great way to escape the Florida heat and the crowds, and have a sleep-in without missing out on the rides. Don’t forget your costume for Mickey’s Not So Scary Halloween Party!

5. Check out the onsite transport

All owned by Disney, transportation on the property is wheelchair- and electric scooter or chair friendly. This includes Minnie Vans, Skyliner, Friendship boats and buses. Buses can only accommodate two non-folding wheelchairs per trip, so factor this into your travel time. Go to Guest Relations or a Disney hotel front desk to learn how to book wheelchair-friendly Minnie Vans.

Note: This article is not sponsored or endorsed by Walt Disney World Parks and Resorts or the Walt Disney Company.

Amy is a 24-year-old freelance video creative from Melbourne and with an everlasting desire for challenges and new experiences. If she's not working on a new project or binging youtube videos, she is planning her next adventure.

U City Adelaide is the place to be

Still mobile with a Luggie scooter

Adventure along the East coast of Australia