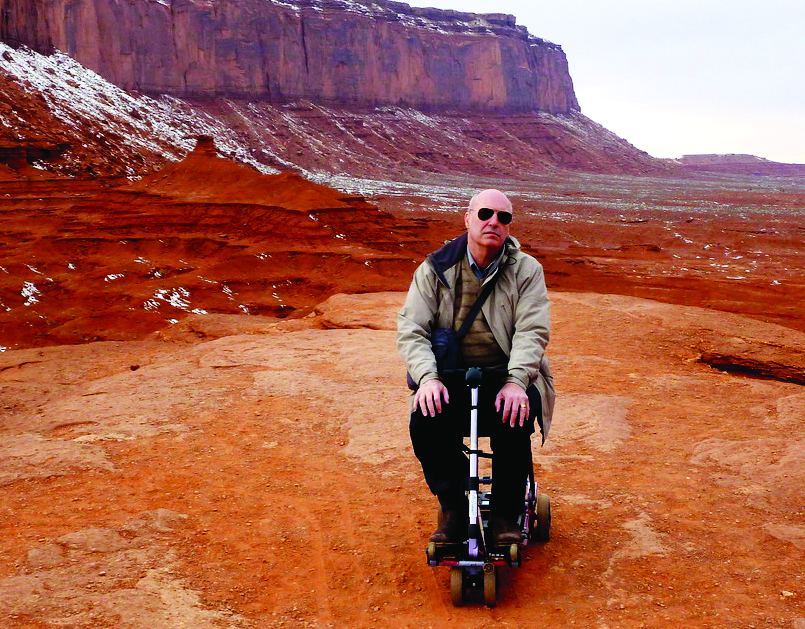 New travel mobility products are popping up all the time. Freerider (of Luggie fame) has released four new high-end models of its trusty scooter, in addition to a Luggie powerchair. Each of the new scooter models features soft-ride tyres and suspension, while keeping the lightweight frame and large carrying capacity.

The design of the new Luggies is intended to address a common issue with the old versions: bumpy terrain meant a bumpy ride. The new tyres and suspension mitigate that problem. Two of the new scooters are also genuine four-wheelers, with a widened wheel base. This is ideal for those who prefer the added stability at the expense of a little manoeuvrability.

Robin, from the New South Wales Central Coast, was one of the first in Australia to get her hands on the new Super Deluxe four-wheel model. She travelled to Europe and Israel on her old Luggie, and indeed shared some of those common complaints.

“Everything about [the scooter] was perfect – except it didn’t do so well in cities with iffy footpaths, so I never felt completely comfortable around Paris. The new one is much better,” she said.

But Scott Sanderson (pictured) wins the prize for bumpiest terrain; he braved Monument Valley in the USA some years back. The Blue Train in South Africa and the Northern Lights in Norway are among other feathers in his cap. For him, however, the narrow wheel base was the biggest problem with the old Luggie.

“The scooter rocks too much whenever you take a bump at an angle,” he said.

Peter Fraser, Managing Director of Scooters Australia (importer of the Luggie), said he was glad the manufacturer had heard the feedback.

“It gives us a lot of trust in the manufacturer. They improved an already great product, responding to the genuine concerns of customers that we passed on to them. It’s extremely gratifying to see old Luggie users come in and get excited about the new versions,” he said.

The Luggie TravelChair is Freerider’s foray in to the powerchair market. Its design resembles that of its scooter cousin, and it too can be folded for easy transportation in a car or plane. With a carrying capacity of 160kg, a sturdy frame, a li-ion battery and a dual motor, expect to see it at many tourist destinations across the world.

Wash away the winter blues

Get out and about with Getaboutable

Hit the road with Mobility Engineering

How airlines are keeping you safe from COVID-19