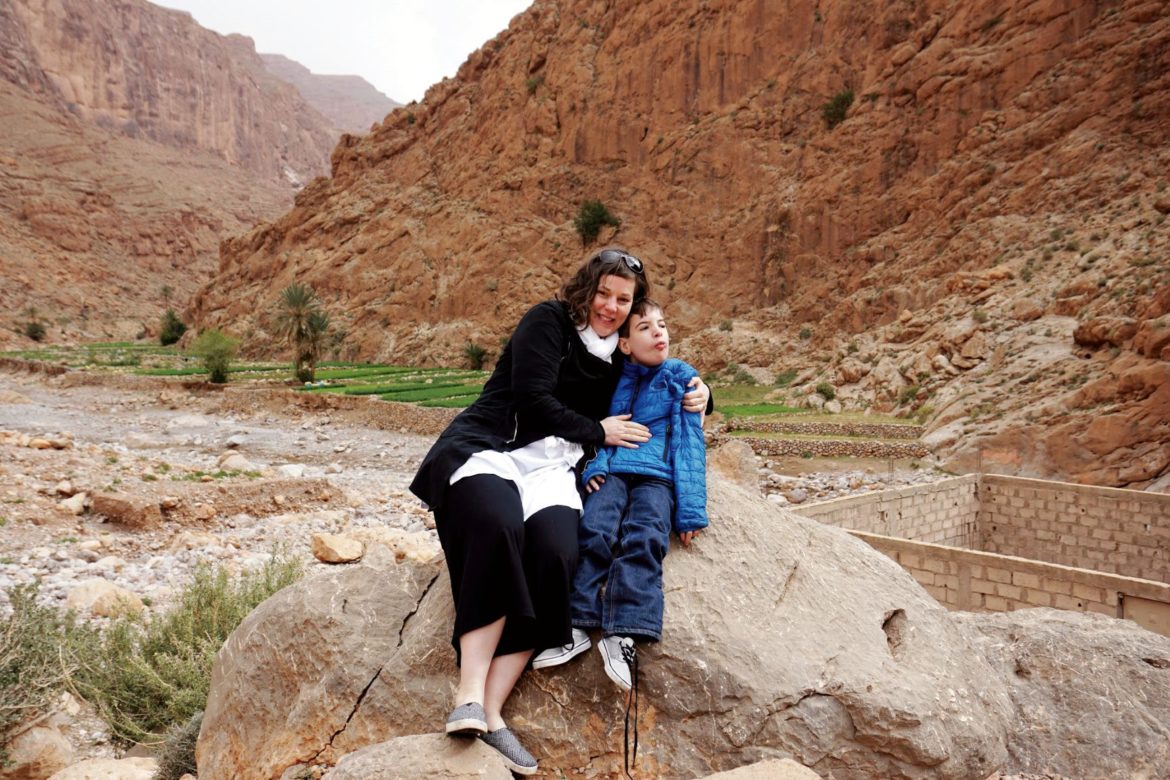 Travelling the world with my kids is something I’ve always fantasised about. Our youngest was born with significant medical issues and disabilities. For the first 6 years of his life, we took exciting flights in planes and helicopters several times a year – to our paediatric hospital. Travel wasn’t even on our minds.

Fast-forward a few years into the future and things are very different. Our son still has medical issues and disabilities, but he no longer gets regularly air-lifted to a paediatric hospital. The boundaries of our world have become wider and wider.

Morocco, one of the northern-most countries of the African continent, has been on my bucket list since I was a teenager. But I wasn’t sure how I would manage to travel with my elderly father-in-law, my 11-year-old son who uses a wheelchair and eats a blended diet via g-tube, my 13-year-old son, my husband, a friend and supporter, and my not-so-in-shape self. Travelling to a country in which we didn’t speak the language, where gender roles and expectations were very different from what I was used to, where bartering and haggling are both an art and a science, and where accessibility was not even a footnote on the national agenda was somewhat daunting.

Enter El Houssaine Ichen, or Houssaine for short. He operates Disabled Tourist Guide, an accessible travel company that specialises in helping people with disabilities travel in Morocco. Houssaine contracted polio at the age of 3, which left his legs paralysed. With the use of braces and crutches, and speaking 4 languages (currently working on 2 others), Houssaine navigates the inaccessible country on behalf of his clients.

The Disabled Tourist Guide was exactly what we needed to travel Morocco the way we like to travel: backpacks, authentic cuisine, clean but not too touristy accommodations, and getting to – and inside – some amazing sites.

We arrived in the early evening and Houssaine met us at the airport. After a short van ride to the old city, we disembarked in the entryway to what appeared to us to be a rabbit warren of people-, donkey- and moped-crowded alleyways with thick, high walls without windows and large ornate locked doors. Our luggage was quickly placed in a wheelbarrow by men who seemed to appear out of nowhere and was whisked away down a dim corridor, quickly engulphed by the darkness and crowds. Another stranger tried to convince us to hand over our son in his wheelchair; we politely but firmly declined.

Houssaine – unperturbed and aware that this was all a courtesy service of the lovely and welcoming riad that we would moments later check in to – waved us along. Huddled close to each other and scurrying to keep close to our guide whizzing along the uneven streets on his crutches, we pressed forward. This, my friends, was a culture shock.

We spent the evening and the next day exploring Jamaâ El Fna, getting our bearings and enjoying the friendly people and delicious food. A warning, though: the haggling and, ahem, assertiveness of the sellers in the medina is very different to what we are used to. It was intimidating.

Then we headed for the Sahara in an accessible van Houssaine hired for us. Now, a word to the wise (which I was not): travelling from Marrakech to the Sahara and back in four days requires a lot of time in a van. And a lot of that time is hairpin roads through the High Atlas Mountains with a driver who has no fear of heights, no travel nausea and speaks no English. When we asked how far it was to our next stop, the answer was always “3 hours”. Was it worth it? Yes. Would I recommend planning it that way? No – most certainly not. However, in addition to being dizzying and occasionally terrifying, the drive through the mountains was spectacular. We passed one Berber village after another, eventually stopping at UNESCO World Heritage site Ait Ben Haddou, famous for its Cassbah and fortified village. Sadly, we didn’t have time to visit the village.

We had lunch in Ouarzazate and carried on Boumalne Dades, admiring the scenic drive along the road to Tinghir. We arrived in Tinghir near the Todgha Gorges as the sun was setting. We stood in the dark of the valley, looking up and around a full 360 degrees as the sun set on the mountain tops all around us.

That night was memorable. The food was spectacular thanks to the advocacy and negotiation of Houssaine, the amenities were not. Our rooms were on the second floor and there was no elevator. The bathrooms were tiny. The building had no central heating and was made from the thick stone and cement wall common in the area (read: it was cold). Our friend got up before dawn to shower so that he would be available to help everyone, but there was no hot water. The hotel staff failed to mention that hot water was only available later in the morning after someone started the wood fire in the hot-water heater on the roof of the building.

The restaurant didn’t have a blender, so they did what any self-respecting Moroccan host would do: they called around to people in the community until they found one we could use to prepare food for our son’s blended g-tube diet.

Several men gathered in the tiny kitchen (some chain-smoking cigarettes), watching and encouraging us while we used a low-powered, community-sourced blender to make food and then push it through a fine sieve so that it was g-tube compatible. They were friendly, interested and even offered some (totally unhelpful) suggestions.

When we set off early in the morning, we drove through the gorge, sheer rock walls soaring several stories high on either side of us, evidence of river flooding trickling alongside our vehicle. A few Moroccan merchants lined some of the wider edges of the gorge, their colourful wares flapping in the brisk wind driving through the narrow space. We drove and drove throughout the day. In the late afternoon, we arrived in Merzouga at the edge of the Sahara. Weary but excited, we prepared for our camel caravan into the desert to find the tent where we would spend the night. Then we discovered that it would take up to 3 hours on camel-back to reach the camp. Up to 3 hours with my exhausted son like a wet, heavy noodle on the back of a camel without his custom seating. Even our power-lifting elite athlete friend was uncertain he could provide that level of support for that long while perched on the back of a lurching camel!

Our guide made other arrangements. We took a wild ride in a Toyota LandCruiser that flew over the sand dunes. We had to leave my son’s wheelchair behind in locked storage. This was not ideal for a couple of reasons:

1 The fact that our hosts had an expensive high-end 4×4 vehicle ruined our white Eurocentric fantasy about our night in a traditional nomadic tent. (Kidding!)

We had a brief camel ride, watched the sunset alter the colour of the sand dunes, listened to musicians sing and play the Tam Tam drums, and slept beside 25 strangers on mats in the sand. Oh, and it briefly rained that night. But fact that my kids were able to experience the Sahara in the rain just blows my mind. It raises the bar for what I believe to be possible!

Fiesta for everyone – Melbourne Fringe Festival 2020