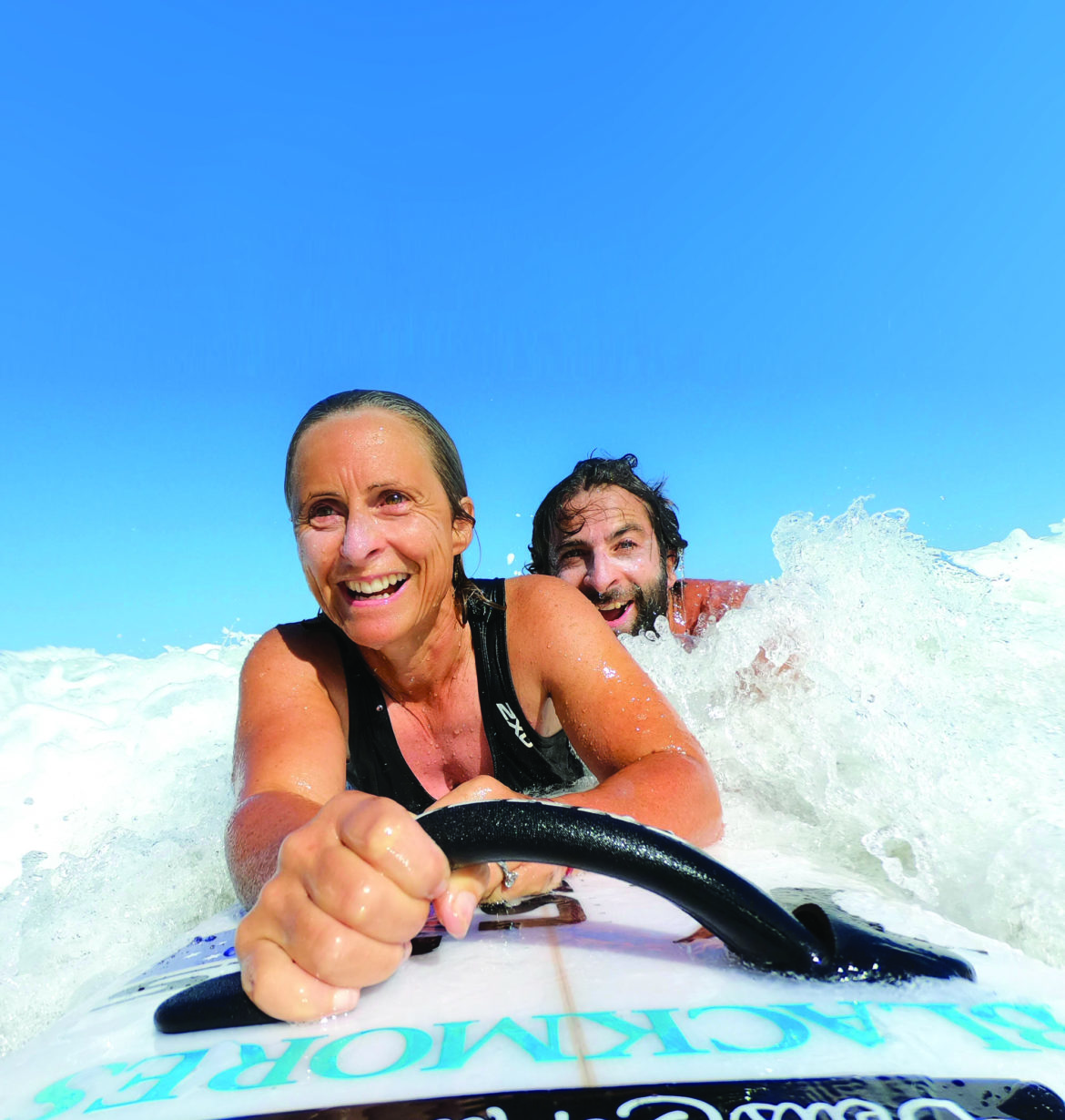 It took a magpie named Penguin and a letter from a stranger to get Sam Bloom surfing again. Since then, Sam has won international titles and held spots on the Australian teams in both surfing and kayaking. When we spoke, she had just returned with her husband, Cam, and three sons from her second surfing world championship in the United States.

“I’d surfed all my life,” says Sam. “But after my accident…it took me five years before I got back on a board.”

A terrible injury on a family holiday in Thailand left Sam paralysed from the chest down. “We were four days into our holiday, half way between Phuket and Bangkok. We were staying at a really beautiful hotel right on the beach. I leaned against the railing and it broke. I fell six metres and broke my back.”

Sam, who was a registered nurse, sports fan and travel lover, was devastated.

“When I came home from hospital, as you can imagine, I wasn’t the best,” she says. “I was angry and sad. From where we live, we can see the ocean and it just rubbed it in.”

It was a strange twist of fate, in the form of a tiny bird, that helped Sam through her rehab and her return back home. On the way home one afternoon, her middle son Noah found a baby magpie blown out of her nest.

“We took her home because we thought that she would’ve died,” says Sam. “She was so cool. It was perfect timing in a way, because she kept me company. I enjoyed caring for her and nothing makes you feel better than caring for others. I would talk to her all the time. She was like a little sounding board.”

Sam’s husband Cam, a photographer by trade, documented the family’s interactions with Penguin the magpie. The photographs were published in a book co-written by Bradley Trevor Greive called Penguin Bloom: The Odd Little Bird who Saved a Family.

This trip to Italy was Sam’s first time overseas in a wheelchair.

“When I got out of rehab, I started kayaking. After a couple of years, I got onto the Australian team and we went to Italy for the world championships.”

Having visited the country several times before her accident, returning in a wheelchair was not easy.

“It was not what it used to be. It was a love-hate thing. I love Rome, but I hated being in a wheelchair going over all those cobblestones. The accommodation was really hard; the bathrooms were so small and Cam had to piggyback me up the stairs. As a family, we still had fun, but it was pretty tricky at the same time.”

Despite international success, Sam’s dedication to kayaking did not match her lifelong passion for surfing.

One day, she received a letter from the mother of Australian pro surfer Julian Wilson.

“I didn’t know them,” Sam marvels. “But she said, ‘I read your story and I know you love surfing and have a connection with the ocean.’ In a roundabout way, she convinced me to get back out there.”

“The first time I got back on a board it was really fun. I went out with Noah [Sam’s middle son] and a friend, Tom Carroll, who is a two time world champion surfer. Tom was pushing me on the waves. I loved it. It’s not the same, but it was great to be back out in the water with Noah having fun together.”

In 2018, Sam competed in the Australian Titles, which she found “much more chilled” compared to kayaking.

“Everyone’s really nice and loves the ocean. It’s still competitive, but it’s not as nerve-wracking as sitting there, waiting to try and paddle as hard as you can for 200 metres.”

It was at this event that Sam made the Australian team and went on to America to surf in the world championships.

“It was so unreal. There are people from everywhere. Because I love travelling, I loved meeting people from other countries – from Argentina and Costa Rica. It was the best event.”

Encountering new people and cultures has always drawn Sam to overseas travel. Her first big trip was to Europe when she finished university, and from there she spent a couple of months travelling through Turkey, down through the Middle East and over to Egypt and West Africa.

She remembers particularly fondly the experience of witnessing a festival in northern Ethiopia.

“In northern Ethiopia, the people are Coptic Christian. We were there for this festival called Timkat where priests dress in silk robes carrying replicas of the Ark of the Covenant. It was awesome. Then you go down south to the Omo Valley where tribes have existed unchanged for centuries. We loved the diversity of cultures. From a young age, I always dreamed of going to Africa and am so grateful that I was able to visit so many amazing countries.”

Sam’s extensive travels will feature in a new book coming out in September. Also written by Bradley Trevor Greive after extensive interviews, it will cover Sam’s perspective and will be called Sam Bloom: Heartache & Birdsong.

“It is so weird seeing your name on a book!” laughs Sam.

The story of Sam, her family and Penguin has also made it on the big screen. A film will be released next year starring Naomi Watts as Sam and Andrew Lincoln as Cam. The filming process was bizarre for Sam, who was on set most days.

“You’re watching a monitor and listening with a headset while they film, thinking, whoa, she’s playing me!” says Sam.

“The one thing I said to them, before they even started filming, was ‘all I want is for you guys to make it honest.’ I didn’t want them to ‘Hollywood’ it, to make it all happy at the end. They stuck to that, which I’m thankful for. Our whole family is really happy with the film.”

Filming might have wrapped, but the Bloom family still have at least one superstar in residence.

“They had to do what they call ‘pick-ups,’ or extra bits of filming,” says Sam. “Someone found a baby magpie, and she’s in the film! As a joke we sometimes call her Hollywood.”

Hollywood, who is usually known as Chicken, is often joined at the Bloom family home by a cheeky currawong called Frankie. Frankie only has one eye and was rescued after being thrown out of her nest as a baby.

“They live outside, but they’ll just fly in. Frankie is cute but she’s very naughty. She’ll know when we want her to go back out because she just keeps flying around!”

With a movie, two books and many a sporting accolade under her belt, what’s next for Sam Bloom?

“I want to continue surfing and keep training to become a three-time world champion,” she says.  “Hopefully the world is in better shape this time next year and we can all get back to travelling, competing and doing what we love.”

This interview with Sam Bloom appeared first in Travel Without Limits magazine. You can subscribe here.