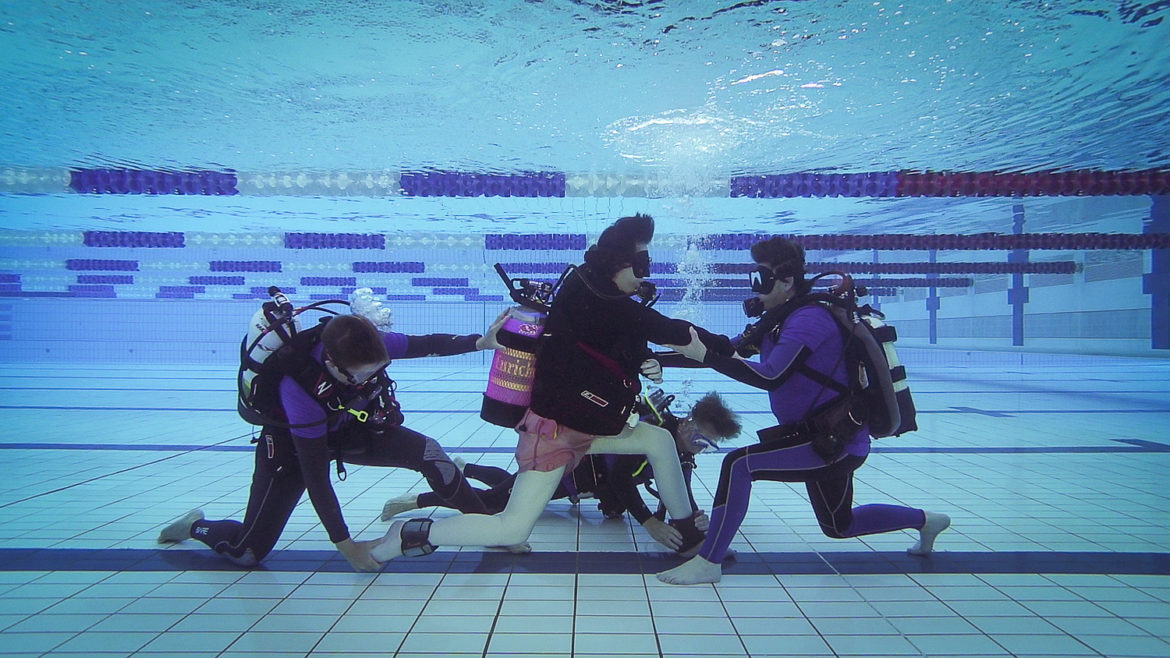 “If there’s magic on the planet, you’ll find it in the water,” says Lyndi Leggett, paraphrasing anthropologist and natural scientist Loren Eiseley.

“I strongly believe in that. There is magic on the planet and it is in the water. We get to help people to feel it and benefit from it by doing scuba therapy; by thinking outside the box, taking the plunge and trusting.”

In April of last year, Lyndi founded the Scuba Gym Australia, a scuba therapy organisation that operates at the Central Coast’s Peninsula Leisure Centre. A qualified scuba instructor, experienced diver and self-confessed water baby, Lyndi filled us in on the passion, people and processes behind Scuba Gym Australia.

How did it all start?

Lyndi is no stranger to motivating people to pursue their goals. In 2018, she was working delivering leadership training here in Australia.

“Every time we would teach the class, we would cover the subject of ‘what will you leave behind?’” says Lyndi.

The question returned to Lyndi when her father-in-law passed away. She was blown away by his amazing legacy and began considering her own. As if by fate, a video popped up on Lyndi’s social media soon after. It was about David Jnr, who had become quadriplegic at 11 years old due to a tumour on his brain stem. His father, David Snr, was a scuba diver.

“He took his quadriplegic son into the water – a little fellow who couldn’t move – in his scuba gear,” says Lyndi.

“[In the video] David showed his son, ten years on, walking underwater. I watched it intently. And I watched it again and again. I thought, this is changing lives and it is underwater where I love to be – I’ve got to do this!”

Lyndi reached out to David Snr, who is based in Florida. Before long he was visiting Australia to teach Lyndi different therapy approaches and she was visiting the US to see Scuba Gym in action.

“I came home with all the paperwork ready to go and we started last year!”

Who can participate in Scuba Gym?

“We’ve had lots of people with different diagnoses come and jump in with us,” says Lyndi. “We’ve got a whole bunch of regulars who have felt what a difference scuba therapy has had for them.”

For one diver, an incomplete quadriplegic who has MS, scuba therapy has meant building up enough strength to do press-ups under water. On land, this translates to patting her cat and holding herself up in bed, despite having had next to no core strength when she started.

Another diver who has cerebral palsy couldn’t keep her regulator in her mouth when she began, but is now completing two laps and picking objects up from the bottom of the pool. A 35-year-old diver with an acquired brain injury lost his tremor, and a young diver with hypotonia could postpone knee surgery thanks to scuba therapy.

Lyndi is proud of the success and determination of each diver, and stresses that the process varies case by case.

“It is very different for each diagnosis,” she says. “Part of me getting to know the diver in their first appointment is finding out ‘what are your goals? What do you want to get out of this?’”

The unique underwater environment of Scuba Gym is what makes it special, Lyndi suggests. Being underwater with no noise except for their breathing can help with focus, communication and can provide relief to someone with sensory needs. For divers with varying degrees of mobility restriction, Scuba Gym can build independence and physical strength without gravity to impair them.

What’s the process of taking the plunge?

The first step in trying Scuba Gym out is getting in touch with Lyndi, who will provide you with necessary paperwork to fill out. This includes a medical form which may require a follow-up by Lyndi’s dive doctor. Once all forms are cleared, you will Lyndi for a 90-minute appointment.

“The first one is all about getting to know the diver. I spend time with each diver who comes to us. They get a good look at all the gear, I talk to them about what we’re going to do, about entry and exit. I introduce them to the whole team.”

Lyndi is joined by a brilliant team of volunteers who are qualified divers and qualified first-aiders. Sometimes a session will only involve Lyndi and the diver. In other cases, volunteers will get in the pool to help out.

All divers are kitted out with a thermal shark skin and a mask.

“We’ll set their gear up for them and put them on the edge of the pool or in the hoist, whatever they prefer. Slowly, we take them into the water.”

Although it is of course up to them, Lyndi encourages divers to have a photographer enter with them at the beginning so that they can witness their own progress. Participants will only reach depths of 2 to 4 metres maximum when diving.

Prefer the idea of a one-off experience of therapy and fun? Lyndi and her team also operate full-day Scuba Camps.

“Our camps are for people with Down Syndrome or Autism or acquired brain injury,” Lyndi says.

“We’ll have emu races on inflatable emus across the pool. We’ll have snorkelling and treasure hunts. We do an arts and craft afternoon, or [participants can] get back in the pool if they want. Each person who comes to us has a qualified diver to be their buddy, so they are constantly with someone. The Scuba Camps are awesome. It is all about cognitive therapy, but there’s a lot of fun as well.”

Scuba Gym Australia currently operates on the Central Coast, well suited to divers coming from Sydney and Newcastle. Lyndi and her team generally run sessions on Mondays and Thursdays, by booked appointment. Keep your eyes peeled. Lyndi has great visions for the expansion of Scuba Gym Australia down the track, including plans for dedicated scuba facilities and perhaps even options for ocean dives when the weather warms up!

Express your interest by getting in touch with Lyndi over email or on social media.

While it is not yet a registered NDIS Provider, Scuba Gym has several great NDIS plan payment options. Read more here.