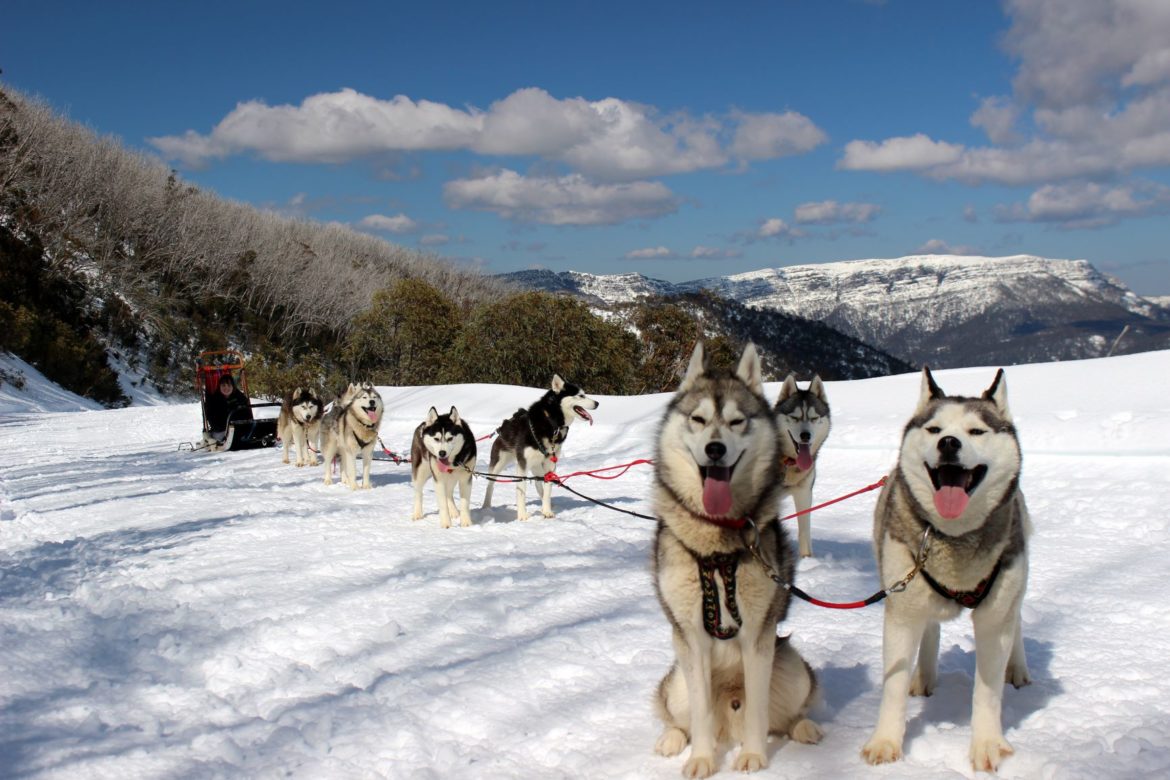 Beaches, rainforests, deserts: Australia is famous for many things, but dog sledding isn’t one of them. In the alpine resort of Mount Buller you’ll find one of Victoria’s best kept secrets—a team of sled dogs ready to take you on the adventure of a lifetime.

I have wanted to go dog sledding ever since I first saw the sport on television as a child. There was something awe-inspiring about the huskies as I watched them racing through the great Alaskan wilderness.

Little did I know that years later I would get to experience the wonders of dog sledding much closer to home.

Owned and operated by Brett Hadden and Neisha Gschwend, the company began offering sled dog tours in 2005 after a chance encounter.

While training for the Altitude 5000 Race, the pair were approached by a Canadian woman who wanted her grandson to experience the joys of dog sledding. After the ride she suggested they start offering tours, and the rest is history.

When another wheelchair user mentioned she’d gone dog sledding with Australian Sled Dog Tours, I got in touch with the team. They were more than accommodating. I booked and began counting down the days until I could tick dog sledding off my bucket list.

When the day arrived, my friends and I piled our snow gear and my wheelchair into the car and we were on our way before dawn.

I generally use a Permobil electric wheelchair, but we weren’t sure how it would fare in the snow so we took my lightweight manual wheelchair instead.

Inadvertently, we’d chosen one of the best days of the season to head to Mt Buller. Snow had fallen the night before, the sun was out and there was hardly a cloud in the sky. The weather was stunning—but the traffic was not! A 3-hour drive quickly stretched to 5 hours, but we eventually made it.

Most of the Siberian Huskies, joined by an Australian Kelpie named Dusty, are rescue dogs. Their relentless energy was contagious. When it was my turn and the sled was pulled up to the trail, their excited barks were so loud they seemed to echo through the mountains.

My friends lifted me onto the sled while the team added extra cushions and a makeshift safety belt to make my journey more comfortable.

Eight huskies were then chosen to pull the sled—each excitedly running to the gangline, tails wagging eagerly.

We were off! The experience was tranquil at times and exhilarating at others.

The huskies eagerly pulled the sled down the trail, which overlooked a vast landscape of seemingly endless snow-covered mountains.

Along the way we stopped to take photos, and the musher shared his insights into the origins of dog sledding and each dog’s vital role in the team.

When the journey was over we said our goodbyes and thanked the team—both people and dogs—for a truly unforgettable experience.

We then headed up the mountain to Mt Buller Village. Day visitors park in a designated car park and are taken up to the village by bus. There’s only one wheelchair accessible bus, so I had to call the bus company to let them know I was coming.

Mt Buller Village is as accessible as you’d expect a mountainside alpine resort to be. The hilly terrain was covered in fresh snow and ice, which made exploring the village challenging in a wheelchair.

The free buses that run in the village are not wheelchair accessible, so we decided to make our way around on foot. Many of the footpaths had stairs and were covered in snow, but the roads had been cleared and there were next to no cars using them. It ended up being easier for my friends to push my wheelchair on the road.

We visited the National Alpine Museum, a charming little museum telling the stories of Australia’s alpine regions and winter sports.

Later we stopped at the Arlberg Hotel for hot chocolate. The hotel is located at the top of Bourke Street Ski Run. Its doors literally open onto the ski run. We had the most amazing views over Mt Buller. It was the perfect spot to watch the action happening on the slopes while keeping warm near the fireplace. The Arlberg Hotel has one of several accessible toilets that are located throughout the village.

By now it was late afternoon and we decided to head home after a truly unforgettable day.

Whether trying out the adaptive snow sports on offer or experiencing the magic of dog sledding, Mt Buller is a surefire destination for adventure seekers.

After all, how many people can say they’ve been pulled on a sled by a team of huskies through a spectacular winter landscape?

To read more of Stacey’s wonderful words, follow the links to her…