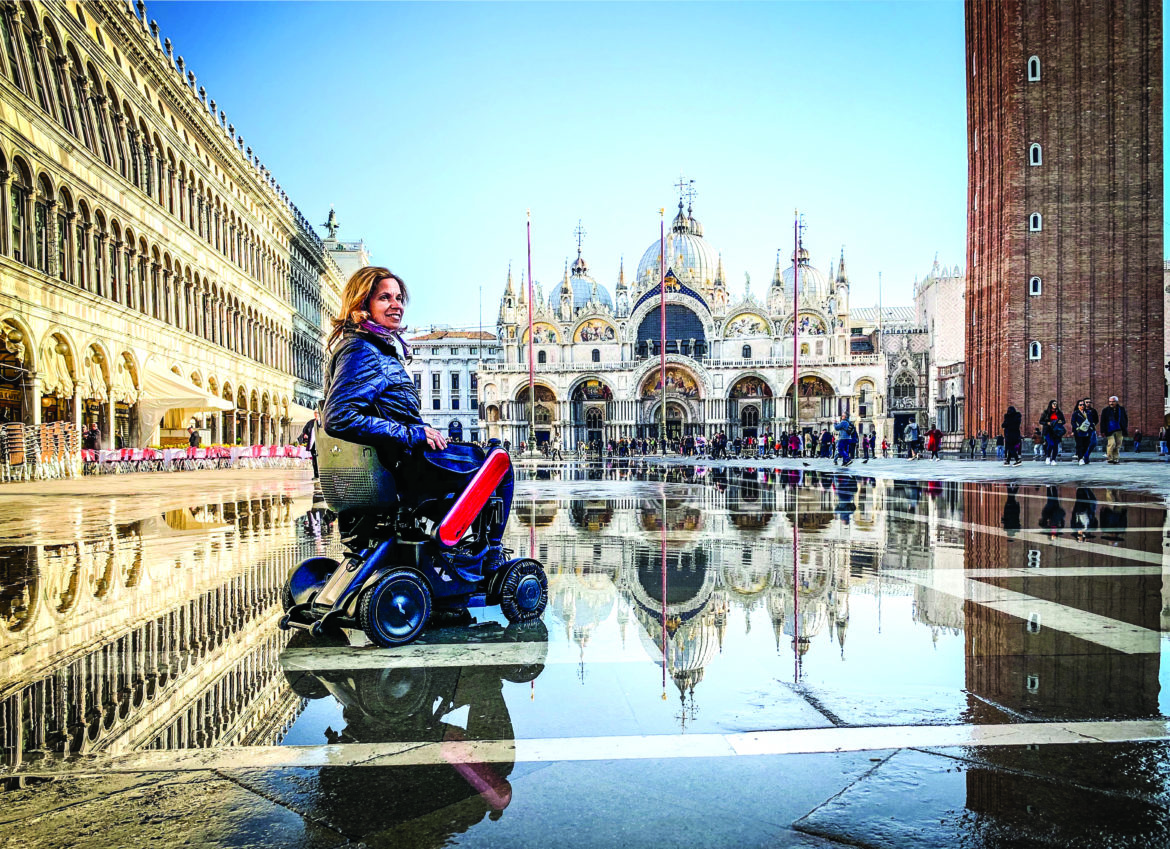 Sylvia Longmire doesn’t do things by halves. When we speak over Zoom, I am struck first by the beautiful photos on her wall (more on that later), and a close second by her lust for life.

Sylvia’s first ever solo trip in a wheelchair involved a sixteen-hour flight, destination Dubai. Mere months later, she went on her first cruise as a non-ambulatory passenger. In the same year, she visited Iceland and then Australia.

At one point in our conversation, Sylvia teaches me the expression ‘to throw spaghetti at a wall and see if it sticks’.

She was diagnosed with Multiple Sclerosis 15 years ago, while on active duty with the Air Force. She reignited her love of exploration by diving straight back in with that Dubai trip in 2016. This time, however, it was in a power wheelchair.

“That was five years ago and there still wasn’t that much out there about accessible travel,” says Sylvia.

“I was reading [what I could find] and thinking ‘there is a space here.’ I’m a professional writer, going on all these trips. Maybe I should be writing about this! Physically, I can’t do much. But if I can give someone information that inspires them and helps them to do something good or exciting, then I want to be part of that.”

Thus, Spin the Globe was born in November 2016. The blog has won three awards, and prompted the publication of several photography, travel-related and disability-related books.

Her book on accessible cruising is the only one of its kind, snagging Sylvia two more awards.

Sylvia is a big proponent of cruising due to its accessibility and the convenience of cutting out air travel and only unpacking once.

“Being able to country hop and city hop, that’s the biggest benefit,” she says.

In fact, when I ask Sylvia about her top travel highlights, she reminisces about a cruise in the Mediterranean.

“It was a 12-night round trip from Rome, and we sailed to Greece and Israel. We spent the night in Jerusalem in a hotel; we went to Judaea and saw Masada and the Old City. As an analyst and a fan of history, I found it fascinating seeing all of these sights and hearing the stories.”

It may have left an impression, but Jerusalem is not Sylvia’s favourite city. Two “polar opposites” tie in that top spot – Vienna and Singapore.

“Vienna has everything that I love – hobbies and art and music,” says Sylvia, gushing about eating sacher torte, witnessing the Lipizzaner stallions and seeing the Klimts and Monets in the Albertina, Schoenberg Palace and Belvedere Palace. “Look at me – I have chills just thinking about it!”

“And Singapore…I love modern cities too. I love skyscrapers and shiny, clean lines. The accessibility in Singapore was phenomenal.”

Sylvia’s sons, aged 10 and 12, join her travels when they live with her in the summer.

The first major trip Sylvia took with her boys was a Disney cruise. They were accompanied by her mother, who enjoys the time with her grandsons. The extra back-up comes in handy, although Sylvia says her sons have proven themselves as great travel buddies.

“They’re funny, they’re flexible, they’re willing to try new things. We compromise – we take turns doing things that we want to do. They’re helpful if I need them to be.”

For someone who was typically travelling four or five months out of every year, locking down due to a global pandemic was not easy for Sylvia. An online acting course and eighteen voice acting parts later, she has her sights set on developing a television documentary series about accessible travel.

In comparison, when I ask Sylvia about her travel goals, she laughs that they ‘may sound rather provincial’.

“Oddly enough, I’ve never been to Mount Rushmore in South Dakota!” she says.

“It’s not just Mount Rushmore. You also have the Badlands National Park, you have the Devil’s Tower and the Crazy Horse Memorial.”

The bottom line is that Sylvia can find something to love anywhere. This is her key to successful travel: keeping an open mind. That, and always packing a roll of duct tape. Given she has visited no fewer than 57 countries, I’d take her word for it!

“Be prepared for anything!” says Sylvia. “You have to be flexible and instead of looking at the reasons it won’t work, look at how you can make it work.”

That said, Sylvia advises the novice traveller to take baby steps instead of jumping on a long-haul flight to Dubai like she did.

“First, stay local,” she says. “Try using public transportation that has accessibility. Then, spend the night in a hotel, even in your own city. Then take a road trip three or four hours away and stay in another city, where you can’t go home and you have to deal with whatever is in front of you. Finally, when you’re feeling courageous, take that first plane trip!”

As I reluctantly wrap up our interview, I ask Sylvia about the canvases I can see hanging on the wall behind her. They are all photos she has taken herself – bicycles in Copenhagen, St Mary’s Cathedral in Krakow, the Wailing Wall in Jerusalem.

But her favourite photo was taken in Morocco, and sits framed in her living room.

“My best friend and I were in Gibraltar and we took the ferry to Tangier for the day,” says Sylvia. They booked a guided tour which went through the medina, where Sylvia encountered five boys of a similar age to her sons. They talked about soccer players, and Sylvia asked her guide to ask them for permission for a photo.

“They leaned up against the wall and I caught the photo with their expressions,” she says. “It was one of those moments that you couldn’t recreate if you tried…I get really emotional when I think about it. I can’t walk and I’m here in northern Africa and I’m taking a picture!

“It is surreal. It is an addiction – those experiences and those interactions with people. I travel abroad and it renews my faith in humanity.”

Lucy And Sammy Aren’t Just Doing It For...